Why Invest in a Stool Analysis? Part II

In our previous blog post, we discussed how stool analyses can be helpful in forming effective treatment plans for individuals with GI symptoms. However, the health of our GI tract and microbiome has system-wide effects beyond just digestion. It is possible to have imbalances in the GI tract without having significant GI symptoms. In today’s blog, we will discuss other information/benefits we might glean from a stool analysis and other conditions in which we can utilize stool analyses.

The intestinal mucosal barrier consists of a mucus layer containing anti-microbial factors and underlying epithelial cells held together by tight junctions. In a healthy gut, the microbiota do not interact directly with the epithelial cells. Instead, it is sampled in a controlled manner by special cells located in the gut-associated lymphoid tissue (GALT) located along the intestine.

When the tight junctions of the intestinal barrier become compromised, the space between the epithelial cells becomes wider. This allows larger undigested food compounds, toxins, and bacteria to pass through the GALT and into the bloodstream. We call this “intestinal permeability”. These large proteins interact with the immune cells and promote exaggerated immune responses or inflammation. Lipopolysaccharides (LPS), or endotoxins, are molecules found in the outer membrane of gram-negative bacteria. Intestinal permeability allows more LPS to enter the circulation, which also triggers an inflammatory response. 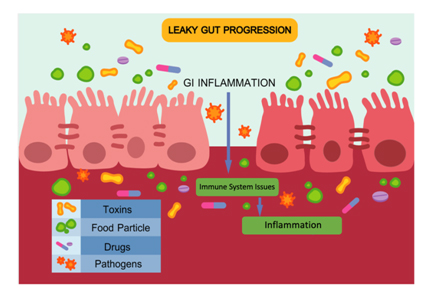 Autoimmune diseases are complex immune-mediated diseases influenced by both genetic and environmental factors. Tolerance refers to the immune system’s ability to be non-responsive to innocuous signals like our own tissues, foods, and commensal bacteria. In autoimmune diseases, the immune system gets confused and loses self-tolerance. Our immune cells no longer distinguish between friend or foe, leading to the destruction of our own tissues.

Microorganisms are one environmental trigger implicated in the development of autoimmune diseases. Both overt and occult infections can trigger a loss of self-tolerance and autoantibody production via molecular mimicry. Molecular mimicry occurs when there are structural similarities (similar amino acid sequences) between pathogens and our own tissues. When the immune system mounts a response to the pathogen, there is cross-reactivity stimulated against the similar host tissues. is a mechanism by which there is cross-activation of autoreactive immune cells due to peptide sequence similarities between pathogen-derived peptides and self-peptides. 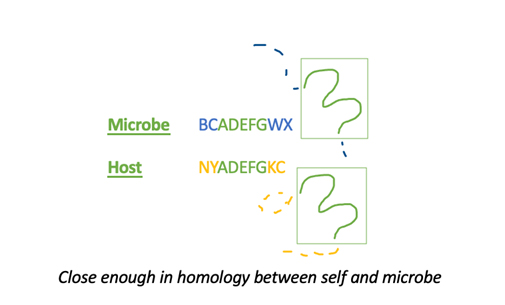 An example of an overt infection triggering an autoimmune disease would be developing rheumatic fever after a strep infection. Examples of possible occult infections are Klebsiella and Proteus. These are two types of bacteria that can reside in our GI tract. They might not trigger an acute illness, but they have been implicated in the development of rheumatoid arthritis and ankylosing spondylitis.

Short-chain fatty acids (SCFA) are created when dietary fiber is fermented by bacteria in the colon. Acetate, propionate, and butyrate are the three most common. Butyrate in particular is important for the gastrointestinal tract because it is the primary energy source for colonocytes and helps to regulate tight junction proteins (barrier function). SCFAs have been shown to have diverse roles in body functions outside of the GI tract as well. They can affect appetite, cardiometabolic health, and the production of lipids and energy. 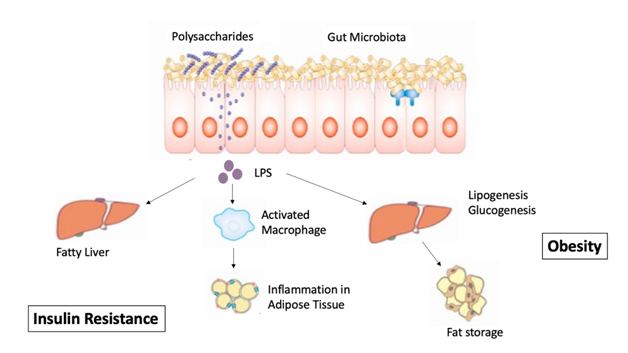 The composition of our microbiome has the ability to affect our metabolism and weight. Obese individuals have been shown to have alterations in the composition of their microbiome when compared to healthy weight controls. The ratio of Firmicutes bacteria to Bacteroides bacteria is higher in the obese population. Leptin is the body’s satiety hormone. It is produced by our fat cells and acts on the hypothalamus to tell our brains we do not need to eat more and can burn calories at a normal rate. Leptin resistance refers to when there are high levels of leptin circulating in the body, but the hypothalamus is not responding to it. Leptin resistance can cause hunger and decrease metabolism. Research has shown that increasing prebiotic intake (healthy fiber for our gut bacteria) increases leptin sensitivity.

Higher circulating levels of LPS have been associated with cardiovascular diseases including coronary artery disease and chronic heart failure.

Circulating estrogens are first metabolized in the liver before they can be eliminated from the body. In phase I metabolism in the liver, estrogens undergo hydroxylation (adding an -OH group to the estrogen). These phase I metabolites are still quite reactive though. In phase II metabolism in the liver, the phase I metabolites are inactivated and become water-soluble so they can be eliminated through the kidneys or stool. There are a few different conjugation pathways in phase II metabolism, but one conjugation method is via glucuronidation (adding glucuronic acid). This estrogen glucuronide conjugate can be deconjugated by certain bacterial species in our gut that produce the beta-glucuronidase enzyme. Beta-glucuronidase removes the glucuronic acid from estrogen, allowing it to be reabsorbed into circulation again. This enterohepatic circulation of estrogens can be an underlying cause of estrogen dominant conditions.

When in Doubt, Treat the Gut

Hippocrates once said “All disease begins in the gut.” A stool analysis can be a useful tool for many conditions, beyond just GI complaints. In this blog post, we discussed how intestinal permeability, short-chain fatty acid production, dysbiosis, and certain bacterial species all play a role in inflammation, autoimmune diseases, metabolism, and hormone processing. Let’s take a look at how comprehensive stool analyses can be helpful! All of these snapshots came from a sample report of Genova’s Gi Effects stool analysis.

Schedule a free 15 minute consultation with Dr. Cloyd today to see if a Stool Analysis is the right test for you. Schedule Now